Deep Dish is a quarterly reading series of Science Fiction, Speculative Fiction and Fantasy! It is a crazy good event, with some incredible authors working in and out of this genre. This event was held on October 3rd, 2019 at Volumes Bookcafe in Chicago, IL, and was part of the Plurality University Network’s Many Tomorrow’s Festival!

Silvia Moreno-Garcia: Silvia Moreno-Garcia is the author of Signal to Noise, named one of the best books of the year by BookRiot, Tordotcom, BuzzFeed, io9, and other publications; Certain Dark Things, one of NPR’s best books of the year, a Publishers Weekly top ten, and a VOYA “Perfect Ten”; the fantasy of manners The Beautiful Ones; and the science fiction novella Prime Meridian. She has also edited several anthologies, including the World Fantasy Award winning She Walks in Shadows (aka Cthulhu’s Daughters). She lives in Vancouver, British Columbia.

Jane Rosenberg LaForge: Jane Rosenberg LaForge is a poet, memoirist, and novelist from New York. “The Hawkman: A Fairy Tale of the Great War” (Amberjack Publishing) was a finalist in the Eric Hoffer awards in 2019. She has published two full-length collections of poetry and four chapbooks, and her memoir is “An Unsuitable Princess” (Jaded Ibis Press). “An Unsuitable Princess” was named a notable book of by HEEB magazine for the Jewish year of 5774. A two-time Pushcart nominee, two-time Best of the Net nominee and one-time story South Million Writers Award nominee, she reads poetry for COUNTERCLOCK literary magazine and reviews books for the American Book Review.

Scott Huggins: Scott Huggins is a Very Nearly-Award Winning Author. He lives in Racine, WI with his wife, son, and two daughters. He has won 2nd Place honors at Writers Of The Future, The Baen Adventure Fantasy Award, and Revise And Resubmit. He is the author of about two dozen short stories. His dark fantasy comedy, All Things Huge And Hideous, debuted in 2019, and his second novel, the Heinlein-juviesque, The Girl Who Wasn’t There, has just come out as well. When he is not writing, he teaches history to high schoolers by showing them how to avert the end of civilization.

Sue Burke: Sue Burke is author of the novel “Semiosis,” which was nominated for some nice awards but lost because there are way too [freaking] many outstanding novels being published in science fiction and fantasy these days. The hero of “Semiosis” is a huge talking plant. The plant will be back in October when the sequel to “Semiosis” is published, titled “Interference.” Tonight, Sue is going to read a brief essay comparing literary fiction and science fiction.

Mary Anne Mohanraj: Mary Anne Mohanraj writes for George R.R. Martin’s Wild Cards series, and is the author of the Lambda-award-finalist SF novella, The Stars Change, the linked story collection, Bodies in Motion (finalist for the Asian American Book Awards, a USA Today Notable Book, and translated into six languages), and thirteen other titles. Previous works include Aqua Erotica, Without a Map, and and stories at Clarkesworld, Asimov’s, and Lightspeed. Mohanraj’s recent publications include chapters for Ellen Kushner’s Tremontaine at Serial Box, the SF/F anthology Survivor (ed.), and Invisible 3 (co-edited with Jim C. Hines). Her newest book, A Feast of Serendib (a Sri Lankan American cookbook), is due for release in March 2020.  Mohanraj founded the Hugo-nominated magazine, Strange Horizons, and has received a Locus Award for service to the field. She serves as Executive Director of the Speculative Literature Foundation (www.speclit.org), has taught at the Clarion SF/F workshop, and is now Clinical Associate Professor of fiction and literature at the University of Illinois at Chicago. She lives in Oak Park with her partner and two children. www.maryannemohanraj.com

Jeremy John: Jeremiah John is a writer, activist, poet, and coder; he’s the author of the yet-unsigned novel Thinspace. He has written nonfiction for such outlets as Huffpo, Geez, and Nuvo, started a program at a nonprofit to organize communities around their own mutual aid, and served six months in federal prison for his nonviolent act of civil disobedience to close the notorious School of the Americas.

Anaea Lay: Anaea Lay lives in Chicago, Illinois where she is engaged in a torrid love affair with the city. She’s the fiction podcast editor for Strange Horizons, where you can hear her read a new short story nearly every week. She’s the president of the Dream Foundry, an organization dedicating to bolstering and nurturing the careers of nascent professionals working with the speculative arts. Her fiction work has appeared in a variety of venues including Lightspeed, Apex, Beneath Ceaseless Skies, and Pod Castle. Her first interactive novel, Gilded Rails, was released by Choice of Games in 2018, her second, Sentient Domain, is expected in 2020.

And a SPECIAL THANKS to our KIND SPONSORS and PARTNERS:

And thank you for your continued support of speculative fiction in the Chicagoland area. We could not do this without you.

Are you a writer of speculative fiction? Want to read your latest work in front of an audience? We’d love to have you join us next time. Please send an email to chris_bauer@comcast.net for more information. 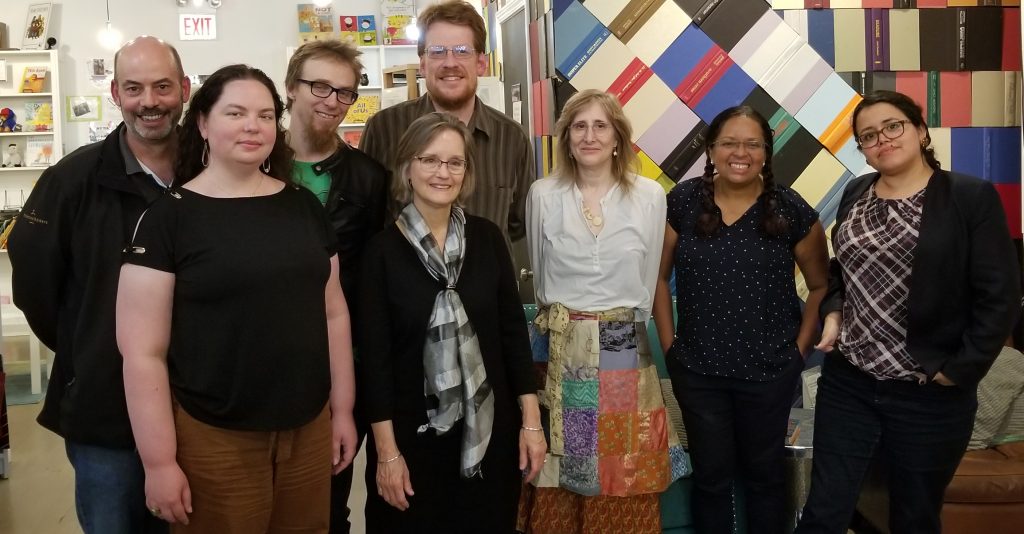 The Speculative Literature Foundation is partially supported by a grant from the Illinois Arts Council Agency.

In 2020, the SLF was partially funded by the Oak Park Area Arts Council, in partnership with the Village of Oak Park, the Illinois Arts Council Agency and the National Endowment for the Arts.